My real birth name was not Zolna, it was Ugron—Gabor Ugron—please Google that name, and you will learn about my noble heritage, every first born son was named Gabor. I was born on February 4, 1944, in Hungary Budapest, the Second World War was still being fought, and my mother moved to Austria, and then in 1948 we emmigrated to Toronto, Canada. I started working as an Architectural Technologist, and in 1974 I joined Xerox. I was the top salesperson two out of the five years that I worked for Xerox.

In 1980 I joined MAI—they where the first Mini Computer company—in 1982 I was the top salesperson in the World for MAI Canada—actually officially I was the second, since an individual in London, England, closed a very large computer deal, that never came to fruition. In 1983 I was transferred to Corporate headquarters in Irvine, California. I became the Director of MAI’s Healthcare Division. The company fell apart during the Junk Bond Market, and in 1987 I joined Rockwell International, and became the Managing Director in the Pacific Rim for Rockwell’s high-speed data communication products.

In 1995 I opened an Executive Search firm, titled Zolna & Associates Inc, and in 2003 I elected to close the company. I am an avid outdoors man, I fish, I am scuba certified, I am also a private pilot, with ratings for high-performance planes. I am also acrobatic certified. I was working on my multi-engine rating—unfortunately the plane crashed at Carlsbad airport in California a week prior to my scheduled check-ride. I ride motorcycles. In my younger days I used to race motocross—not professionally—but pretty much every weekend. I ride a Road King Harley-Davidson. I also owned 16 other motorcycles, I owned a BMW 1220 Lt, a Honda Gold Wing, and numerous motocross motorcycles.

I also enjoy shooting both pistols and high-powered long-range weapons. I load my own ammunition for virtually all of the weapons that I own. On a personal note, I was married, and divorced twice. I have four children—two from my first marriage the others from my second marriage. I pretty much raised them on my own. In January 2013 I started posting videos on YouTube. By August 2017 I had posted over 18,200+ videos with a total of 31,000+ subscribers, and an additional 40,000+ viewers. Since most of my videos were conservative and Google/YouTube is a far left-wing Liberal institution—as is Facebook—the YouTube Team removed all of my videos after having given me three unwarranted strikes. 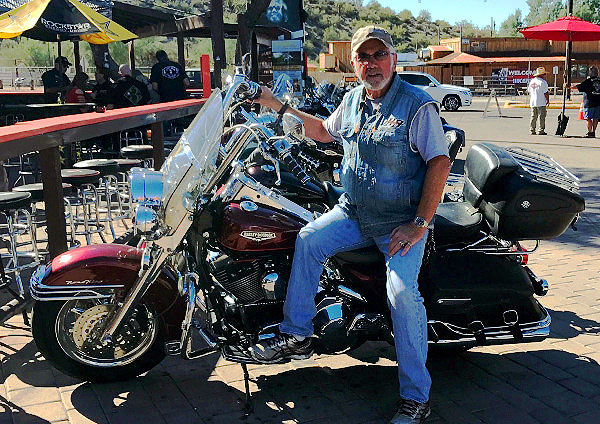 The reception that the launch of the website, zolnareport.com has, and is receiving is overwhelming. Many folks are finding the website, or being directed to it by likeminded viewers, and/or past subscribers of my YouTube Channel that was taken down by "The YouTube Team". I am receiving numerous compliments on the website and the creative talent of the Website designer for having posted a lioness—go me wearing my traditional cowboy hat.

I am receiving numerous ideas as to how to improve the channel and, although I appreciate those comments, people need to realize that many of those ideas and changes take two things: time and money. I expect many of those ideas will be incorporated over the foreseeable future but, once again, it does take time and money. I am fortunate in having the website being designed by an individual—who has a full time job—and he can only spend some of his limited spare time, in adding additional functionality to the site.

The good news is that Google/YouTube can no longer determine what I can or cannot say on my channel. For those of you that have followed me over the past five years, you know that I do my absolute best to keep you all informed with the truth. I created a GoFundMe Account, under "The Truth Seeker".

The truth must be heard by all, our future, and your children, and your grandchildren’s future depends on us knowing the truth, and by holding those criminals responsible for the crimes that they have committed against us.

PS: Thanks for your time, and consideration!

Hello everyone, this is Nick again from Indigo Swift LLC. I wanted to give another update on the site and our plans. As you may have noticed, we now have the ability to "Like" and "Comment" on videos. To be able to do this, you simply need to sign up for your free account.

We had decided to program this functionality completely from scratch without using 3rd-party platforms such as Disqus. This is because we are in a fight against corporate giants who feel the need to censor us at every turn and eliminate our ability to use their platforms without any warning. Additionally, it puts us in control of the database of users—I highly doubt YouTube will provide Gabe with a list of his 31,000+ plus subscribers since they removed his channel! Hopefully you get the point!

We still have several things on our "To-Do-List"—I thought I should mention them because I know many of you will contact Gabe asking for these features. Sometimes it's easier to just know they're in the works:

Give me a holla!
Use the form below to send me a message:

Thank you for your inquiry! I will respond as soon as I can.

Sign up easily and quickly with your email address. Your email will be your login. Choose a friendly screen name that will be displayed on any comments you post.